I can’t explain why I even care about The Philosopher Red any more.  All he’s done since he’s been here is cause problems for me, upset the locals, associate with known hoodlums like Maxie Kahn, and attempt to start a revolution.  I guess it’s one of those childhood attachments that we all make with some non-ordinary friend, the kind that complicates our lives, but we just can’t seem to shake loose from.  But, I’m getting to the point where I jus don’t care any longer about childhood attachments.  The rogue philosopher of revolution has got to go, and I’m going to tell him that today.

So, I come back to my apartment in the early hours of the evening, after he ruined my only afternoon to relax and do a little reading.  I’m ready for him.  He’s got to go.  I’m not going to let this slide. 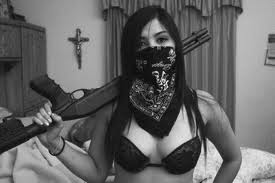 But, the first thing I see when I open my door is that crazy, gun-toting revolutionary leader of Feminists United to Suppress the Slaughter,Maria Isabel Chavez.  She’s changed her name from Marie to Maria…says it sounds too Bakersfield, as in California…where she was born and raised.  And now she’s insisting on being called Negrita de la Muertos – the Little Dark Lady of the Dead.  Says she wants to become a more “authentic” revolutionary…she wants her F.U.S.S. followers to have a leader with a Hispanic name, one they can trust.  I don’t know if I trust her, but I’m not going to argue with her…that’s for sure.  And I’m also not going to ask her why the Commandante of a revolutionary group dedicated to suppressing the slaughter would choose that name.  She appears to be taking her new image seriously.

And, if that wasn’t enough, she’s gathered together a small group of friends she calls her revolutionary army.  I think that they’re here just to watch my television.  They claim to be Los Monos Locos, or the Crazy Monkeys.  That is the name of a local dance club here.  I don’t think they’re true revolutionaries.

I ask Commandante Negrita de la Muertos where the Nicaraguan banana workers are…the ones The Philosopher Red brought back after his encounter with the Killer Figs of Costa Rica.  She doesn’t say a word.  She gestures at one of Los Monos Locos sitting at my table feasting away, and a drunken teenaged surf bum hands me one of my Japanese place mats, saying, “They were getting a bit chatty… asking too many questions…get my drift?”

I have no idea what to think of this.  I’m certainly not going to ask too many questions, that’s for sure.  But I do have one question for my little revolutionary lovely.  “Where’s The Philosopher Red?  We’ve got a few things we need to straighten out here.”

“He went down to Dengue Alley,” she said, lowering her assault rifle.  “Maybe you should go down there and let him straighten you out on the way things are going to be around here from now on.”

“He’s there scouting out an action we’re planning,” she said, caressing the barrel of her weapon.

I make my escape, leaving the Little Dark Lady of the Dead and her Monos Locos to my apartment.  The Philosopher Red and I need to have a little showdown.  I hurry out the door and make my way to Dengue Alley.

Dengue Alley got its name a few years back when an outbreak of Dengue Fever swept through town.  For whatever reason, not one person in the dirty alley got the fever.  And, this is a place where suspicious-looking water forms reddish rivulets, even during the dry season.  I found the hidden entryway to the alley, and discovered a shop there had human torsos displayed in the window.

I move down the blessed alley, finding no indication that The Philosopher Red had been there.  I even stopped at El Monasterio de los Addictos to ask the watchman if he had seen a crazed-looking monk in a red robe.  He said he hadn’t, and I moved on.

I carry on with my search for The Philosopher Red, and some idea of “…how things are going to be…” around my apartment.  I see a woman stealing some chairs from the back door of a restaurant, and call out to her for help.  She hurries off down the alley, yelling something in Spanish about those “…pinche Monos Locos…”  Then I see the Capuchin monkey doll, crucified on a fence post in the classic Christ death pose.  Most people would think things are getting a bit eerie here in Dengue Alley, but it’s such a beautiful day…how can anything go wrong with my search for The Philosopher Red and our impending showdown.

Pagan symbols surrounded me…the tortured faces of demons with unrequited lusts…and a dousing pool for the devil children of the devil-worshipping priests, no doubt.  I was beginning to have serious doubts whether a professed coward like The Philosopher Red would ever venture down this alley of the damned…this trail of horrors called Dengue Alley.

I finally came to the end of my trail of terror, and not a clue as to where the red-robed maniac was lurking, if lurking he was.  I strolled out of Dengue Alley, into the dying sunlight of a tropical evening.  I decided that the only answer to my dilemma was to go to the beach, grab a book, a hammock, and a beer at El Pescador and enjoy the sunset.  It would give myself another day to find The Philosopher Red…and see just what the hell was going on back at my apartment with Commandante Negrita de la Muertos and Los Monos Locos.

Until tomorrow – Pura Vida everybody… sorry for the anti-climactic ending.  Tomorrow’s another day, as they say in the movies. 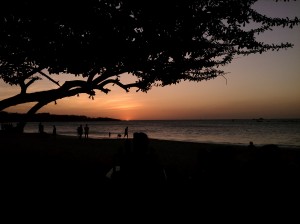