Sometimes things just don’t work out here.  And, sometimes that’s not such a bad thing.  The Philosopher Red and I were looking for a hideout after my interventionist activity at the bar with no name.  Maxie Kahn has a long reach, but he is fearful of the unknown, and ghost hotels qualify as such to him.

Strange winds blow on this beach.  On the far side of the point tourists crowd the sand…here…not a beach blanket to be seen.  The trees are dead, their branches rattling like wind chimes of bone.  The trails are blending back into the natural settings they were carved from.  Seats and benches and railings built for the anticipated tourists are reverting to their original form – Driftwood.

Grand plans…lots of money to invest…but not enough, I guess. 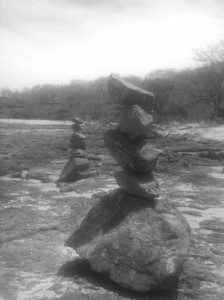 Whatever they are, they work.

The sand here is so hot it burns calloused feet, accustomed to heat, rocks and crumbled, earthquake cracked pavement.

Bird calls are frequent, but not the chirpy, happy sounds of alerting others of their kind to finds of food, shelter, or potential mates.  They sound like a caution.

It doesn’t matter…I’m moving in until I find accommodations safe from Maxie Kahn, and acquainted with plumbing and electricity and water. 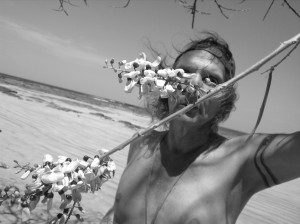 Finding something alive here is not as easy as it is elsewhere…but it takes some looking.  These are the only flowers on the beach…it is the dry season. 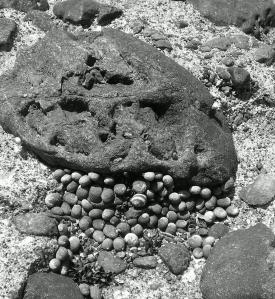 There’s always life on the rocks…small creatures struggling to survive when the tide is out and the temperature is nearing 100 degrees Farenheit.  These hermit crabs have found themselves a bit of shadow, and they’ve took refuge together, waiting out the six hours of low tide.

They are a natural example of what the long-gone investors were thinking of when they started this fool’s errand…unnatural and temporary colonies of tourists drawn by brochures of Costa Rican sun, surf, sand, and swimsuits that leave little to the imagination.

The tide will come in…the hermit crabs will survive…the wet season will return.

And, I will still be on the beach…a man without a country, drawn to Costa Rica…a refugee who could no longer fool himself that living without a culture was really anything more than surviving.

From the beach of ghosts of dreams and seasons past, Pura Vida to all, and to all, Pura Vida…