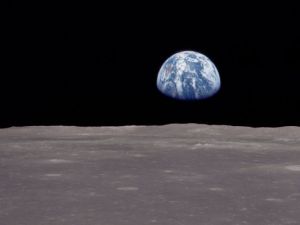 Would there be an Earth Day without the shots of the Earth rising above the horizon of the Moon?  Shots like these, taken by astronauts involved in the Apollo program‘s moon missions gave earthlings a whole new perspective.

I’ve had people who were around back in the early seventies and active in the environmental movement tell me that it was such a powerful image at the time, one that had never been seen before, it had a truly sobering effect on the collective conscience.  The visual proof that we all lived on a small blue planet in the middle of a vast universe that was extremely unforgiving to creatures attached to oxygen, water and such earthly delights…creatures such as human beings.

Various elements of the Flat Earth gangs had so embedded the idea that the Earth was the center of the universe into the thought processes of so many powerful humans that even after the blasphemers  Copernicus and Galileo had had their says it still had to be an underpinning of many people’s World Views.  The idea that there were limits involved with our temporary tenancy had been theoretical, and easily ignored before these photos, both beautiful in their unique point of view, and their stark contrast.  People who were already aware of the importance of taking care of the homestead were given a practical tool that could be used to instill a sense of total awe, and a sense of responsibility, into the thinking of people who had until then taken our Third Stone From the Sun for granted.  Good enough.  All that wealth, time, and energy focused on getting to the moon first did result in something useful.

“The Dark Side of the Moon” has to be one of the most interesting documentary films I’ve ever seen.  One of the aspects it mentioned up front was how white-bread homogenous the astronauts chosen to participate in the Apollo program were.  All white males with strong attachments to conventional family values and established religious dogma.  Alternative views of the universe or mankind’s role in that universe were not going to be acknowledged or encouraged.  It didn’t work out so well.

One of the first people interviewed for the documentary was Yuri Gagarin’s widow.  She told the interviewers something her husband had always been afraid to mention publicly or privately to anyone except her…that he had heard a humming sound when he was in outer space, as if there was a force of some kind at work “out there” that until then had only been imagined by artistic types, such as composers – Holst, The Planets, or the Sound of the Spheres, maybe.  This led into a where-are-they-now bit about the former Apollo astronauts.

One of the former astronauts interviewed had been so thrown out of his previously held world view that he had retreated to a remote area of Hawaii, if memory serves me, where he painted large murals of cosmic bodies using his moon boots and a rock pick instead of brushes or painter’s knives.  The footage of his interview showed him among a few of the paintings he had created using these unconventional tools, and they stunned me, a truly artistic statement of a feeling of separation from the familiar and “known” world.  Now there was a man whose world view had been changed by the experience of being propelled out of the comfort and assurity of his previously unquestioned belief system.

Another astronaut interviewed also seemed to be attempting to deal with this challenge to his sense of place in the universe.  He was filmed standing on Mt. Ararat, the wind blowing his hair in his face…and it was a serious face.  His eyes had a strange, haunted look to them, as if he was clinging onto a sinking life raft and he knew it.  And what was he doing on Mt. Ararat?  Why, looking for the ultimate life raft, Noah‘s Ark.  His voice was shaky, about as shaky as the “proof” he had come up with that this truly was the site where Noah and his Ark had made landfall…a few pieces of wood, most burned…fire refuse.  It didn’t appear as though his previously held idea of a life raft was doing much for him.  He too seemed like a soul detached, like the astronaut from Kubrick’s “2001 A Space Odyssey” that was last seen spinning off into the dark depths of an unknown, forbidding, and assuredly deadly universe.  Instead of coming to terms with a new world view he was desperately back-pedaling…back to his roots, his core belief system, despite what he had seen, done, and possibly heard…if he had heard the same hum of the universe that Yuri Gagarin claimed to have heard.