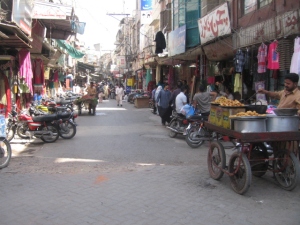 I met the young poet on a social media site.  Over the past few months we’ve become friends – more than friends I guess.  She addresses me in Urdu, her native language, as big brother.  I address her in Spanish as my little sister.  Odd to me, having such a relationship with someone on almost the exact opposite side of the world…Sialkot, Pakistan – the City of Poets.  I asked my little sister, the poet Maryam Shabhaz, if she would visit the shrine of Allama Iqbal, the national poet of Pakistan and another native of Sialkot, to give readers an idea of the importance of poets in her country.  She sent me these photos of her pilgrimage.

Maryam started with a photo of the bazaar, not an unusual place to start in a city with a history similar to Sialkot.  Alexander the great made Sialkot the eastern-most outpost of his empire.  Persians, Afghans, Sikhs, Turks, Mughal emperors, Brits, and Hindu Indians all took their turns trying to rule the Punjab, where Sialkot is located.  Cities that have often found themselves in the way of history tend to be market-oriented.  I’m going to let the national Poet of Pakistan, Dr. Sir Sahib Allama Iqbal take over for a while with an excerpt from his poem Age of Infancy – 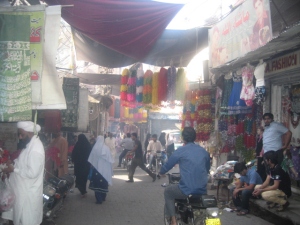 The earth and sky were unknown worlds to me,

Only the expanse of a mother’s bosom was a world to me;

Every movement was a symbol of life’s pleasure to me,

My own speech was like a meaningless word to me.

During infancy’s pain if somebody made me cry,

The noise of the door chain would comfort me.

Oh! How I stared at the moon for long hours,

Staring at its silent journey among broken clouds;

I would ask repeatedly about its mountains and plains,

And how surprised would I be at that prudent lie.

My eye was devoted to seeing, my lip was prone to speak,

My heart was no less than inquisitiveness personified.

Maryam, it seems, stopped off in the market…did a little shopping around.  Here she photographed a dealer of essential oils, Ittar in Arabic…herbal scents distilled for perfume and home use.

The next photo she sent me was of the exterior of Dr. Sahib Iqbal’s former home.  I think I’ll let an excerpt of Maryam’s poem The Departed Soul speak for the reverence Pakistanis have for a national hero, one so revered he has a national holiday named in his honor.

Giddily, stand at the light curve,

Wait to embrace the departed soul.

Are left of the life carefully mold,

After him, days keep unveiling to unroll

Not any tasks hold gild; 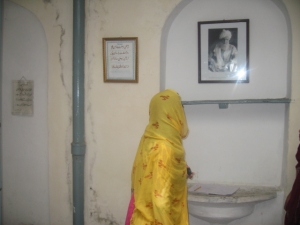 Mr. Riaz, the caretaker of Allama Iqbal’s shrine, told Maryam that photographs were not allowed in deference to the memory the poet, scholar, and politician that had such an impact on Pakistani independence.  She told him about the project she was working on, and he agreed the photos were for a noble cause, giving her the unheard of permission to take photos.  The first photo inside the former home and current shrine to Dr. Sahib Iqbal is of Maryam signing the guest register.  Between 50 and 75 Pakastanis a day visit the shrine, with the number rising to 300 or so when a college or school arranges a visit.  The visitors who had signed the register before Maryam were from Rawalpindi, and Mr. Riaz pointed out a former Foreign Minister of Pakistan who had signed the register not long ago,misspelling Islamabad, the capital city in which he had exercised his official duties.  I guess politicians are the same everywhere.

Maryam Shahbaz’s poetry can be viewed on WordPress under the name Maryamshahbazmian.